In the early 1960s, residents realized the need for an additional fire department when fires started occurring in the area with increased frequency. At the time, the closest fire departments (Six Forks, Bay Leaf and Fairgrounds) were more than five miles away. Thomas Kelley, a member of the Six Forks Fire Department, and Joe Sandling, a member of the Bethesda Fire Department, collected names of community members interested in serving on a committee to form an area fire department. The committee then selected boundaries of a four-mile fire district. The boundaries began on the Durham Highway (Highway 70) at Crabtree Creek and traveled west to near the intersection of Mount Herman Church Road. The Durham Highway Fire Protection Association became a non-profit corporation in 1964.

Committee members solicited the community for contributions as well as interest in joining the fire department. Knocking on doors was hard work, but it was not in vain, for in November 1965 a tax supported fire district was approved. Mr. Tom Bailey, President of Central Mack Sales, deeded a small piece of property behind the Amoco gas station on Davis Drive to the Durham Highway Fire Protection Association. The land was to be used to build a fire station on, with the stipulation that it was to be deeded back to Mr. Bailey once the land was no longer used for a fire station. 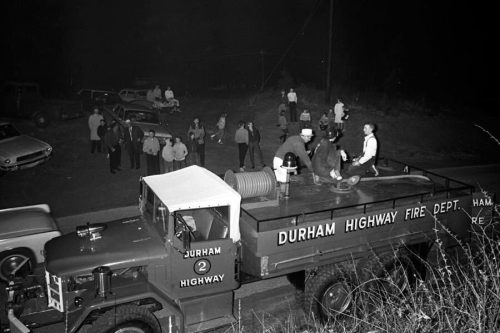 Since the land had been deeded to the fire department, Durham Highway was able to borrow money on the value of the land. The money borrowed was used to order a new 1965 Chevy/Darley Pumper. While waiting for the new fire pumper to be delivered, the fire department acquired its first piece of motorized equipment. This truck, an army surplus deuce and a half, required extensive modification for the water tank. The volunteer firemen did most of the work on preparing the truck for a new paint job. The total cost of this first truck was about $300.00 and it’s primary purpose was that of a tanker.

Old TruckThe Chevy/Darley Pumper, that had been ordered, was completed earlier than expected. At the time the money needed for the payment of the new truck had not arrived. A handful of firemen signed their names to guarantee payment on the new pumper. If it were not for the dedication and selflessness of the first volunteer firemen, the new pumper would not have been delivered.

The first open house was held on March 21, 1965. All residents and business within the new fire district were invited. The attendance was judged to be adequate for a first open house. Also in attendance was Mr. Ed Linear, Insurance Commissioner for the State of North Carolina. He stated that the Department of Insurance had assisted in the organizing and writing of the by-laws, and provided training for the volunteer firemen. In 1969 a GMC/Williams Tanker was accepted and the old army surplus tanker was retired. 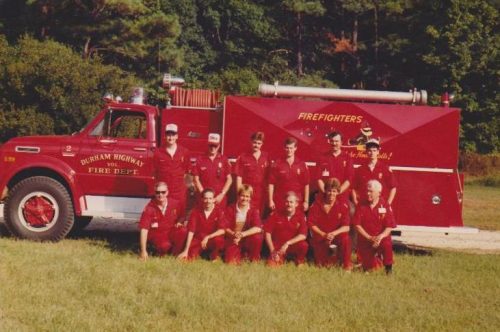 Now with the sixties behind, the seventies came on in a hurry. The City of Raleigh was growing and spreading out Highway 70. The fire department acquired two new pieces of apparatus, a 1976 Chevy/Bean Pumper and a 1976 Chevy/Tanker. An open addition was added to the fire station on Davis Drive to accommodate the new tanker.

With building space being limited at the Davis Drive location, a survey of the fire district was performed to look for land to build an additional station. A site which provided good growth potential and location was found on Pinecrest Road. Vernon Jones, Chairman of the Building Committee, was appointed to oversee the building project. The new six bay station was completed and accepted in 1978, this new station was designated Station Two. Station One continued to operate, and housed a pumper and a tanker. Station Two also housed a pumper and a tanker. 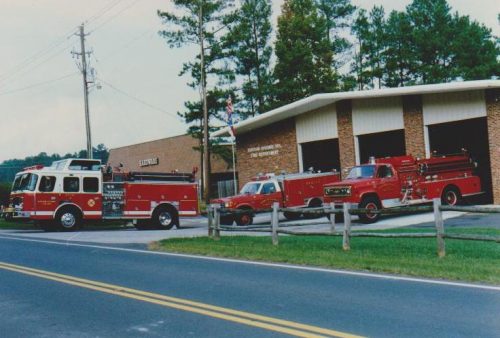 In came the 1980’s and once again a massive housing boom was occurring within the fire district. Additional fire apparatus was deemed necessary to cover this growth. Three State of North Carolina surplus vehicles were acquired. The first one being a 1971 Chevy StepVan, which was converted into a Squad truck by the members of the department. The second vehicle was a 1966 Dodge PowerWagon, which was converted into a Brush truck. And the third unit was a 1967 Dodge fuel truck, which was converted into a tanker. By the early 1980’s most of these trucks became inadequate for the commercial growth occurring within the fire district and decision was made to purchase a combination pumper/tanker. The apparatus, a 1981 Mack/Darley Pumper/Tanker, was delivered in late 1981 and was housed at Station Two. In 1984 it was becoming apparent that the 1965 Chevy/Darley Pumper could no longer meet the fire flow requirements of the fire district and a 1984 Mack Pumper was acquired. 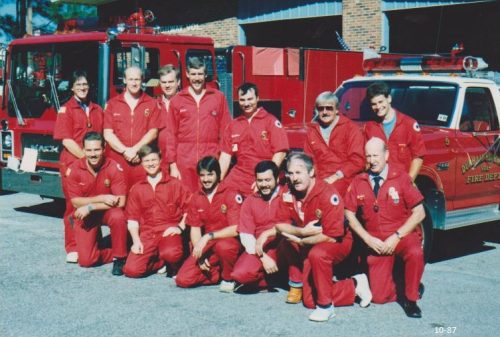 The mid-eighties brought additional apparatus additions and deletions. Personnel needs changed as the fire department upgraded it’s service delivery to district residents. In 1987 a paid daytime staff was hired due to increased daytime call volume. Also during that year a 1987 Ford/E-One rescue unit and a 1987 Ford brush truck were accepted. The1965 Chevy/Darley pumper, the 1966 Dodge Brush truck, the 1967 Dodge tanker and the 1971 Chevy/Squad were then sold in the ensuing years.

City of Raleigh growth continued at an explosive rate, as did the Durham Highway fire district. A need for a Station Three was seen. For several years a committee 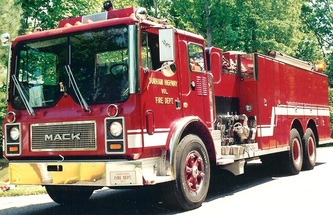 looked for property which could accommodate a fire station. Property was found on Norwood Road and a fire station was completed and accepted in 1992. Also a 1992 E-One Pumper/Tanker was purchased to better serve the district, which was growing fast in population. This new unit took the place of the 1969 Tanker which was now showing it’s age. Also during this same time period Station One was closed due to City of Raleigh annexations. Station Three was renamed Station One and the original building, that had served as Station One for so many years, was moved behind the new Norwood Road station. This old building serves as a utility/storage and maintenance facility for the fire department.

In 1997 the fire department accepted delivery of a Pierce Dash Pumper/Tanker. This unit replaced the 1976 Chevy/Bean Pumper, which was then sold. In 1998 increased service delivery requirements caused the fire department to write specifications for a heavy rescue unit, and in 1999 a Pierce Lance 2000 Rescue was accepted by the fire department. In the year 2000 a new Ford Brush Truck was purchased to replace the aging 1987 model.

Today Durham Highway is located at 11905 Norwood Road just north of I-540 and Leesville Rd. We have a first due area of about 20 sq/miles and have a number of contracts with the city of Raleigh. We run about 800 calls per year. Our Station 2 is being utilized by the City of Raleigh FD as Station 23 that also houses a DHFD Pumper/Tanker and Tanker.